Over the last few years it’s been impossible to ignore the rise of Virtual Reality (VR) technology. VR is the term used to describe a three-dimensional, computer generated environment which can be explored and interacted with by a person using additional equipment, such as a headset. Ample media coverage suggests that VR is on the horizon of infiltrating the lives of even the most novice of tech users. VR is not as prominent for the majority of consumers as the hype might suggest; for many it remains an expensive venture, far from affordable.

More commonly used, Augmented Reality is the integration of digital information with the user’s environment in real time; the availability for AR technology on digital devices provides opportunity for simple infusions between mainstream culture and technology. The use of AR features has risen significantly across many app mediums including gaming, news, education and sports. Social media apps such as Snapchat and Instagram, have become hugely popular as they allow users to embed AR filters to the camera function to make creative and often playful, interactive portrait edits which can be shared amongst followers. Just look at the raging success of Snapchat’s break-dancing hot dog filter, released earlier this month.

However, if the discourse from Google and Facebook is anything to go by, future widespread adoption of mixed reality tech will continue to be a key trend in 2017. Earlier this year, Facebook made a bold claim that the smartphone camera will be the world’s first Augmented Reality platform to be used widely in the lives of everyday smartphone users. A new venture titled ‘The Camera Effects Platform’ has been announced which enables developers to easily fuse the digital world with the real world in a number of innovative and inventive ways. The underlying aim is to bring Augmented Reality to the masses in order to position themselves to reap the benefits of audience growth by keeping users tied within their digital space.

What makes Facebook’s platform stand out from the rest is the way it uses object recognition to allow users to choose AR effects based on the object in front of the camera. According to Mark Zuckerberg, Facebook founder, “some of these AR effects are going to be fun, others are going to be useful.”  This creates an avenue for targeted marketing and advertisements to be strategically overlaid across masses of content in the users’ Facebook feeds and searches.

Imagine a digital world where you can hover a camera over your real life view and get an instant feed of information related to what you are seeing: a restaurant shop front and a stream of Yelp reviews pop up; or your football pitch view links you to pages about the teams competing; a historical monument which plays an audio guide; a cosmetic product which downloads a list of ingredients and video tutorial of how to apply the make-up. The possibilities are endless. 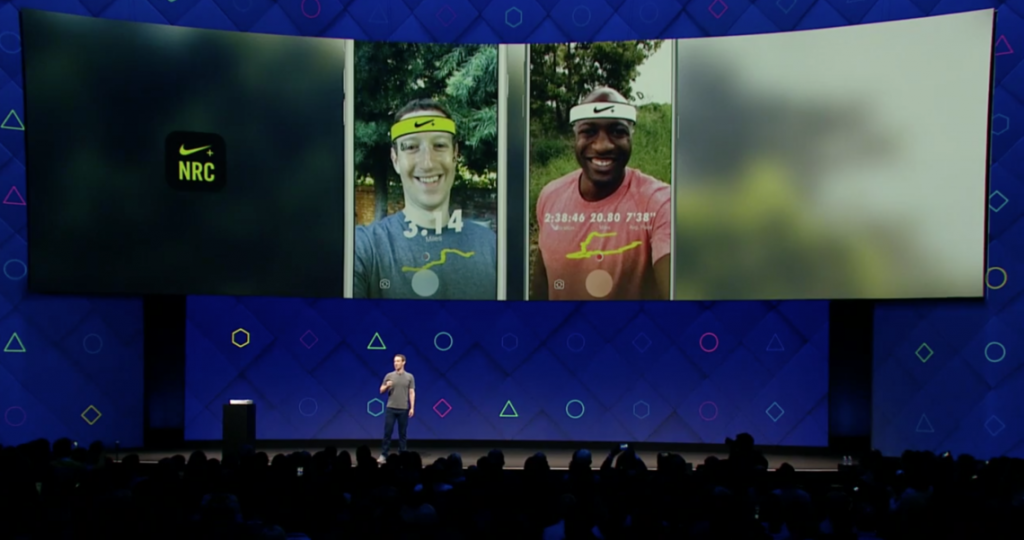 Leading rivals, Google are in the midst of developing one of the most powerful and sophisticated mobile AR tools on the market ‘Tango’, which uses an infrared projector and additional cameras to detect the surrounding wall and floor measurements and is able to make digital 3D objects appear as though they are in the room with you. A demo provided by Google shows how Tango can be used in classrooms to create a virtual interactive globe in the centre of the room.

Another partnership between Google and the American Museum of Natural History allowed users to manipulate a virtual dinosaur in the museum. Google Tango has also partnered with retail business Walgreens and aisle411 to take augmented reality shopping to a whole new level by using indoor mapping technology to locate shoppers to guide them to specific retail products. This is part of an innovative, immersive, in-store gaming experience with embedded loyalty point offers and targeted advertisements as consumers walk down the aisles.

As AR technology becomes more readily available, it is inevitable that the costs will reduce making it more widely used. Big players across global and local market sectors will embrace AR in new and exciting ways to forever change how we interact between the digital and real world. If Pokemon!Go is anything to go by, the AR hype is real and closer to the mainstream markets than ever before.