I want it now! | KHWS
Marketing

One year on from its official European launch in London, Amazon’s Prime Now service – which enables online shoppers to receive their purchases within one hour of ordering – has faced some resistance in Paris.

The negative reaction may have something to do with the delivery giant informing city authorities just days before its launch (they may have been trying to sneak it in while the country focused on the Euros). It didn’t escape the attention of the Mayor of Paris though who criticised it as “unfair competition” against traders and craftsmen.

One trade rep in the Paris local government, commented: “When an actor like Amazon shows up that does not play by the same rules as everyone else, it messes up the playing field and creates a situation of unfair competition.

We’re not opposed to innovation; we just don’t think it’s fair that Amazon does not have to pay the same social charges as regular businesses. What Amazon is doing is entirely new, and is not covered by our current legislation on competition, so yes, it makes sense to think of new rules.”

Paris has been particularly combative against US tech firms seeking to launch in the city, with Uber and Airbnb also facing pressure from the local government.

But what Amazon is trying to crack, and is generally seen to be succeeding, is the ‘instant gratification’ market.

Instant gratification is the desire to experience pleasure or fulfilment without delay or deferment. Humans are hardwired to want things ‘now’, but over time we’ve trained ourselves that we can’t get everything we want straight way. However, modern technology and rapid information exchange is challenging that – our expectations, particularly amongst millennials, have increased and our patience has diminished.

Amazon is capitalising. Delivery volumes are increasing rapidly and as its service gets quicker and quicker, their daily package volumes go higher and higher.

It can have purchases with us on the same day, even the same hour, and it’s having huge implications on its future outlook. Traditional retailers have historically enjoyed in-store collection as a competitive advantage over Amazon. That advantage is slowly going away as it ramps up the service.

A January 2016 Survey* of 1,200 Amazon Prime customers shows that one in four already have adopted Prime Now. And why wouldn’t you subscribe to the £79 a year Prime service? Aside from the instant delivery included (OK, the one-hour service is an extra £6.99), you also get access to music, TV shows and movies all available at the click of a button on your tablet, phone or Smart TV.

While it’s acknowledged as difficult and expensive by Amazon executives, they also know that customers love it and they’re willing to continue to invest to open up fast delivery to as many of their product lines as possible. Most recently they introduced the food service, AmazonFresh.

This has opened a new market up to the e-tailer and alerted an entirely different set of retailers – namely major supermarkets and grocery stores – to take note.

Wal-Mart – by far the largest brick-and-mortar retailer in the US – relies heavily on its grocery business, which accounts for about half of its top line. Amazon is encroaching on Wal-Mart’s business.

The same January survey suggested that Prime Now is one of the avenues that Amazon is using to gain share in the $1 trillion grocery market and early survey work suggests the strategy is working.

The survey indicated that 70% of respondents bought goods via Prime Now multiple times a month, and notably about a third of shoppers bought groceries. Amazon is partnering with local grocery suppliers who can have goods delivered within the hour.

The ‘Fresh’ food delivery is available in a handful of metropolitan markets in the US and has recently arrived in some areas of the UK – Check for your postcode here. 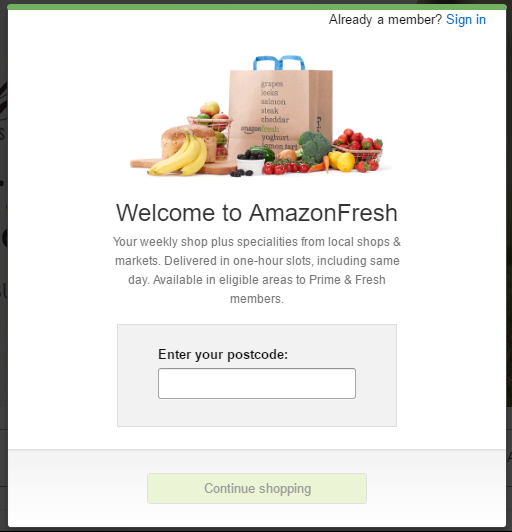 And Amazon has plans to further increase profitability within the groceries market by starting to sell its own branded packaged foods — a move lots of traditional retailers have already made. But Amazon isn’t a traditional retailer, so this move could be another cause for concern amongst it’s new competitors.

The well-published next step in Amazon’s ambitious plan is to take them to 30 minutes delivery. It envisages that within the next 10 years, hundreds of thousands of small drones will be tearing across the skies every day, largely under their own automated control. Whether this is realistic or more a PR stunt to get people talking remains to be seen. 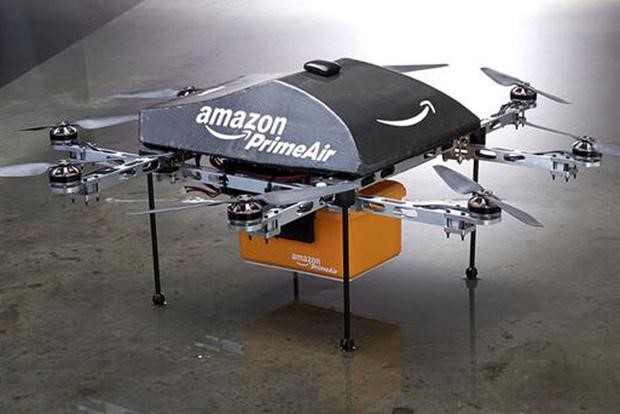 Regardless though, Amazon continues to drive higher expectation for instant delivery. They are pushing to satisfy our natural desire for immediate fulfilment and generating demand for goods to be with us ‘now’.

That is pushing other retailers, both online and offline, to evolve and to challenge Amazon’s early dominance in the ‘instant gratification’ market:

But it feels as though they all generally have a long up-hill struggle to penetrate a market that Amazon has built for itself around instant gratification.